e-soccer.com > Opinion > Where were mascots created?

Where were mascots created?

Mascots are some of the world’s best known sports fans, and whether there are pauses in game play, lopsided games or half-time has come, it is these mascots that take centre stage in order to keep the crowd and fans entertained. Simply mascots make sports a little more fun, particularly for those who aren’t really that interested in watching, and with some of the very best mascot moments including dance-offs, basketball tricks or fighting with the opposition mascot they really are a popular part of the sport. But while Mascots are deemed to be mainly adopted by American sports, the history of the mascot is far more complicated than that.

The term mascot derives from the French word ‘mascoto’ which means witch, fairy or sorcerer. From this the slang term ‘mascotte’ meaning talisman or lucky charm was created throughout the 1960s, and it was often used throughout gambling when the gambler suddenly had a run of luck. This word was then popularised in the 1880s French Opera La Mascotte, about an Italian farmer who is visited by a mysterious virgin named Bettina who, as long as she remains a virgin, functions as a good luck charm in the opera. Overtime, this was gradually used in a sports setting, with the term first being used around 1880 in American baseball – a boy named Chic was described as a good luck charm in an 1883 issue of Sporting Life. Gradually over time, Sporting Life and The New York Times began to drop to ‘e’ and the additional ‘t’ to get us closer to the ‘mascot’ spelling that we use today.

Throughout the 19th century and into the early 20th century, all sports mascots were either children or real animals, and they were taken very seriously. It is believed that the first football mascot was a bulldog named Handsome Dan for Yale and the bulldog mascot is still used by the university. 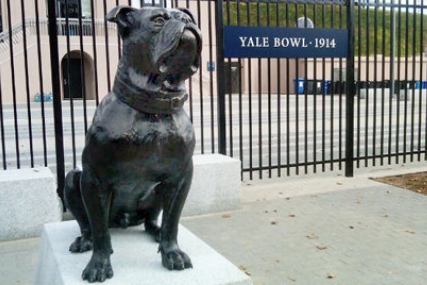 Statue of the original Handsome Dan 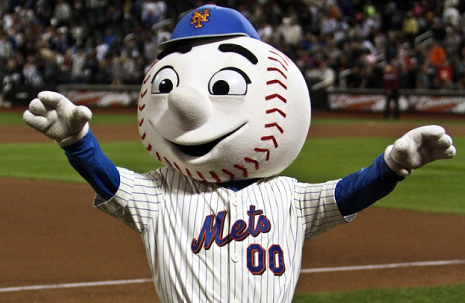 While mascots are still generally used in American sports, they are also used very regularly in English football. Mascots like the Gunnersauras Rex for Arsenal, Cyril the Swan for Swansea, Deepdale Duck for Preston North End, and Beau Brummie for Birmingham City amongst many others are regularly spotted dancing and cheering up and down the side-lines. While many of the mascots have gotten into trouble for misbehaving on match days, the majority of the mascots tend to head out into the communities and visit schools to explain the importance of healthy eating and exercise to young children. In addition to the costumed mascots, in every single professional football game both league, cup and international children walk out with the professional footballers as a form of mascot. This is deemed to be a way of integrating the community feel, and originally is said to be formed from FIFA’s partnership with UNICEF for a campaign a number of years ago. Mascots continue to be a key part of the game, and while they may not be as celebrated and well-known as American mascots, they truly play a key part in English football.

Welcome to the e-soccer.com blog, this is where we provide you with the best sports news and articles from around the world. We discuss a wide range of topics on this blog and include categories such as sports, opinions, transfers, debates and even polls. We have partnered up with TicketReview.net to bring you the lowest prices in football tickets for the Premier League. Be at the stadium for the biggest matches in European football.